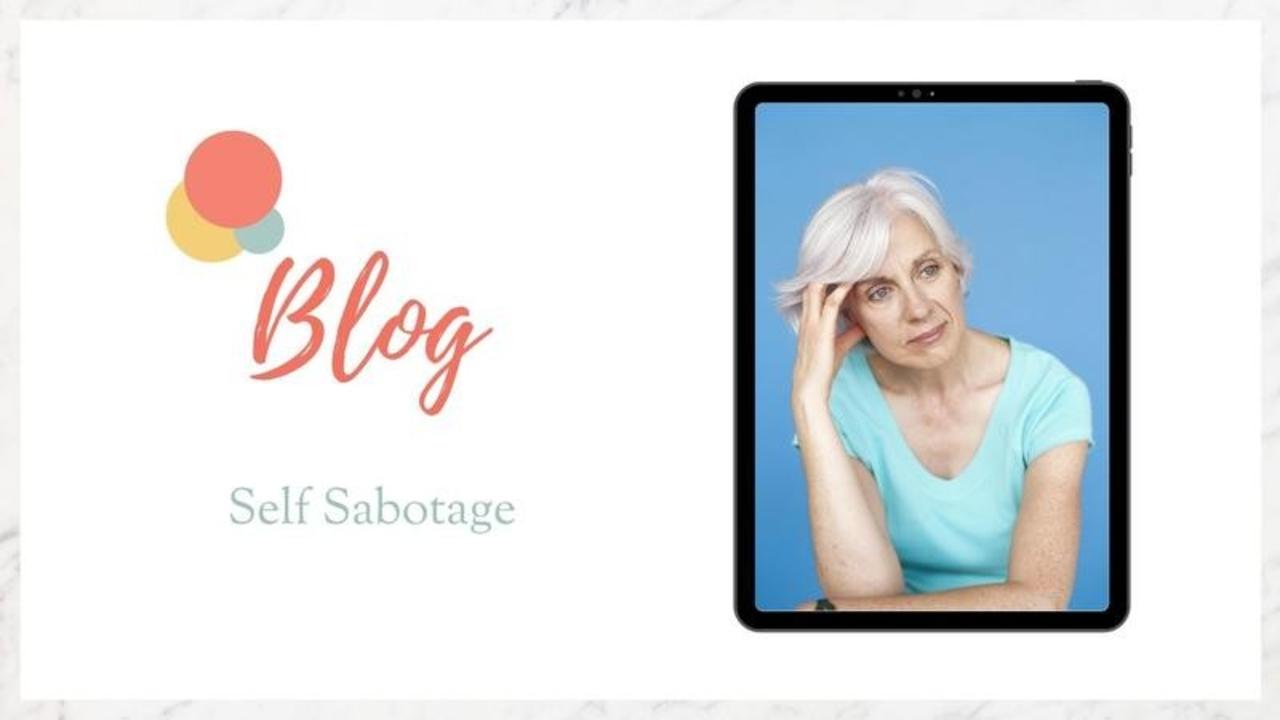 Procrastination is not only the thief of time (a phrase coined by English poet, Edward Young), it is also a prime self sabotaging mechanism. You know you need to write that report/make that phone call/pay that bill, but somehow you just can’t bring yourself to get on and actually do it!

What do we mean when we talk about “Self Sabotage”? Any behaviour that gets in the way of achieving our goals, or does us harm, such as:

Unhelpful habits keep us trapped in inertia, ultimately damaging our self esteem as well as our prospects in life. We are, it seems, all too prone to shooting ourselves in the foot when it comes to working towards goals or even simply living a happy life.

"Make sure your worst enemy isn't living between your own two ears." Surfer, Laird Hamilton.

What keeps us stuck, standing in our own way like this? The manifestations of self sabotage, of which the list above is a mere sample, are symptoms of much deeper issues. Fear, anger, despair - if we want to address our own sabotaging behaviours it is necessary to discover and face deeper problems. Working purely on our tardiness, or avoidance or propensity to drink a bottle of wine every evening is like throwing sand at a wall - the solutions won’t stick.

“…all there will ever be is what’s happening here and the decisions we make in this moment, which are based on either love or fear. So many of us choose our path out of fear disguised as practicality.” Jim Carrey

Fear disguised as practicality. Think about that phrase for a moment. Fear keeps us in place, in a “safe” zone.

Imagine you had a burning ambition to write a book. Your friends and family think you’re a little bit delusional, but they indulge your “fantasy” that one day you’re going to be a bestselling author. So you start to write, maybe take a few classes, do your research and really begin to enjoy yourself.

As you get towards the end of your story, you find yourself writing more slowly. “Life” gets in the way - you have to see your friends, spend time with family and do the chores, after all. You can’t let your obsession with writing your book inconvenience other people, can you? Gradually, you realise the final chapter is taking as long as the rest of the book, and you acknowledge to yourself that you’re putting off typing “the end”.

Finishing your book means you’ll have to start thinking about submitting it to a publisher, or an agent, or maybe working out how to self publish. What if you fail? Procrastination allows you to put off that possibility.

What if you succeed? Do you fear success even more that you fear failure? How will your friends and family react to your new status as an author? Will they feel you’re not “one of them” any more? Will they think you think you’re better than them in some way? Dare you find out by finishing your book?

I once worked at the job centre as an employment and benefits advisor and several clients stuck in my head. One, a young man who I’ll call Callum, came from a part of town where most of the residents were unemployed. His parents were jobless. All his friends had left school with few prospects and were generally content to draw their benefits and spend their time in the pool hall and on their games consoles.

Callum was different. He worked diligently to find work until one day he was taken on by a local builder as an apprentice. Callum was over the moon. But for three months, he hid his new status as an employed man from his friends and family. He went out in the mornings in his tracksuit, carrying his site gear in a bag so no one could see. He knew that if his friends knew he was working, he would be ostracised - he would no longer be part of the group.

I don’t know what Callum’s friends thought he was doing when he stopped hanging around during the day, but his fear of being perceived as different was very real. So much so that he began to turn up for work late, skipped a day here and there until eventually he was fired from the job he had worked so hard to attain. His self sabotaging behaviour caused him to swap the prospect of a sustainable future for the comfort of being part of the society he knew.

Not all self sabotaging behaviour has such extreme consequences as Callum’s. But it does often have its root in lack of self worth or fear. My photography mentor, Sue Bryce, says that to be successful you have to choose your pain. Growth often hurts.

So the next time you find yourself breaking a diet with a cream cake (note to self!), consider this - what will you gain if you attain the goals you have set yourself? Just as importantly, what could you lose?

What is really holding you back? Could it be that you are sabotaging yourself because the goal you have set yourself is actually wrong for you? Is it time for a rethink?

Answer honestly, and you could find yourself on a path where self sabotage becomes a thing of the past.